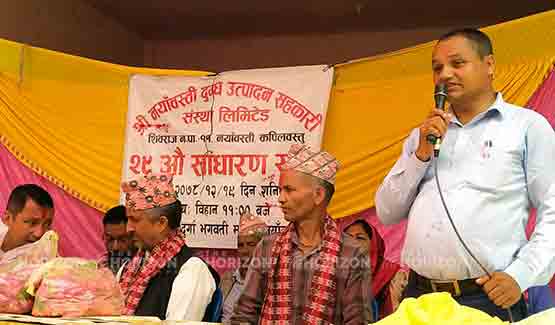 Necessary to invest in the productive work of the cooperative, The Horizon Times, News of Nepal

Lumbini Province Assembly member Arjun Kumar KC said that cooperatives need to invest in productive activities to make the country prosperous. He said that the cooperative has appreciated the milk produced by the farmers by operating the collection center. He stressed the role of cooperatives in playing an effective role in social activities by strengthening the economic situation. KC mentioned that the milk collection center, which is operated keeping in view the rural areas, is a shining example to solve the problems of the common locals.

Meanwhile, the ward chairman of Shivaraj Municipality, Ward No. 3, said that the cooperative has helped the livestock farmers and said that they are no longer obliged to go to Tata to collect milk. The cooperative said that it was necessary to provide not only milk collection but also agricultural commodities including fertilizers to the farmers. Chairman Sapkota said that the cooperatives, which have been operating for a long time, have made a positive impact on the local community’s pastoralists.

It is mentioned in the annual report that the cooperative had a turnover of Rs. 1 crore 67 lakh 97 Thousand 510 rupees. Similarly, Dhaneshwar Khanal, Chief of Animal Husbandry Branch of Shivaraj Municipality, Chandra Maya Padel of Janajagruti Women’s Group, Mina Pantha, and Lekhnath Khanal of Progressive Women’s Group addressed the program.