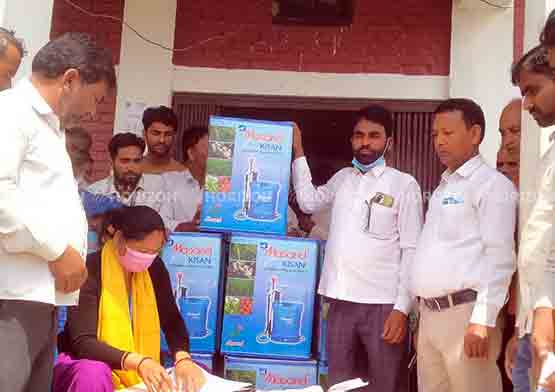 One hundred spray tanks to farmers, The Horizon Times, News of Nepal

Nepal: Ward Office No. 4 of Shivaraj Municipality of Kapilvastu has distributed spray tanks to farmers. According to the ward office, 100 farmers were distributed free of cost on Sunday to make it easier for them to grow vegetables.

Chief of Shivraj Nagar Agriculture Branch, Tara Chand Chaudhary, lauded the work done by the ward and said that the spray tank would help in agriculture and especially vegetable production. He said that the general public should focus on investing in the agricultural sector as it is based on agriculture. Chief Chaudhary said that it was important for the ward to allocate a budget focusing on agriculture in the coming days as well.

Ward Chairman Safiq Ahmed Musalman said that agricultural products have been distributed to increase agricultural production. He urged the farmers to commercialize while conserving vegetables and other crops. He also said that the agriculture sector has been given priority by allocating Rs 500,000 under the annual program of the ward.

He said that the materials were distributed to the general public who did not get the related services from the ward office. The Muslims also expressed their commitment to helping the needy, including those in the areas of education, health, agriculture, and animal husbandry, and those who have been re-elected in the near future.