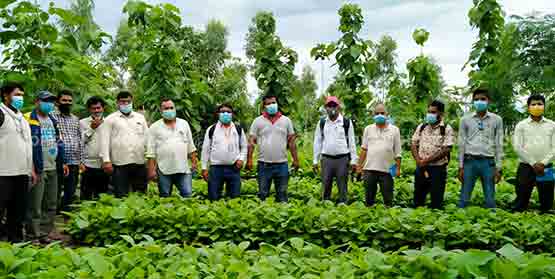 Kapilvastu, Nepal: Nurseries constructed by Kapilvastu Partnership Forest Management Committee have been monitored. The committee has stated that the forest has produced 150,000 saplings in the nursery in Maharajgunj Municipality.

Activist journalists of the district and forest officials including Kiran Man Bajracharya, president of the Federation of Nepali Journalists, Kapilvastu, monitored the activities including the plants produced by the forest nursery on Saturday.

Assistant Forest Officer Ezaz Ansari informed that a total of 150,000 saplings including Tikka saplings, Bakaino, Epil, Gulmohar, Khayar, Masala, Tejpata, and other species were produced in the partnership nursery.

He said that the saplings produced by the forest will be distributed free of cost to the consumers of 16,000 households in 21 wards of Maharajgunj, Shivraj, Buddhabhumi and Krishnanagar of the district from the first week of Asar.

Ansari said that the forest is preparing to set up a sawmill by leasing 10 katthas of land in Ward No. 11 Balaramwapur of Maharajgunj Municipality.

Chairman Gangesh Nath Tiwari urged the consumers to make the forest green by planting trees in the nursery while monitoring the activities of the partnership forest including planting various species of seedlings and land mills in the nursery.

He stressed the need to be aware not only of cutting down the plants produced in the forest but also of planting them. Tiwari said that planting trees would not only make the environment green but also help in increasing oxygen.

He also said that it was the responsibility of all to balance the environment by planting trees due to deforestation.

Under the partnership forest, saplings will be distributed to consumers in 21 wards of Maharajgunj Municipality, 4 wards of Shivraj, 4 wards of Buddhabhumi, and 2 wards of Krishnanagar Municipality.

After the government stopped the distribution of timber, only 23,000 cu ft of timber is left to be distributed in the partnership, said, Chairman Tiwari.