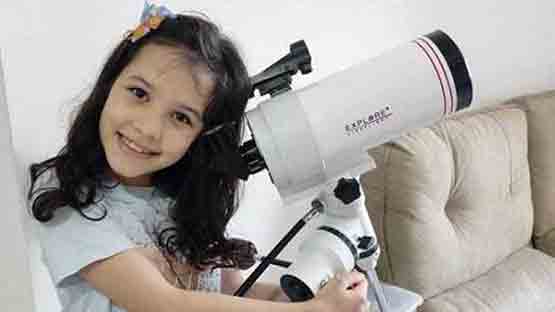 Kathmandu: Nicole Oliviera, seven years old, became the world’s youngest astronomer after identifying seven asteroids for NASA, the US space agency. From a young age, the little girl was enthralled by space and astronomy.

Nicole, as per sources, took part in the citizen science programme “Asteroid Hunt,” where she discovered seven asteroids. The International Astronomical Search Collaboration, which includes the National Aeronautics and Space Administration, started the programme (NASA).

Since then, the young lady has gained a great deal of attention and has progressed to the 1st International Seminar on Astronomy and Aeronautics. Nicole was invited to give a talk by the Brazilian Ministry of Science, Technology, and Innovation. Although her young age, the girl has a wealth of information about space, demonstrating her passion for the subject. In the meanwhile, the seminar was led by the minister.

Oliviera’s interest in astronomy grew rapidly, as per R7, a Brazilian news organisation.

Oliviera begged her mother for a star when she was two years old, and her mother gave her a toy star. Little did her mother know that her child would develop a huge fascination with space and activities related.

However, the youngest astronomer has created her own YouTube channel, where she and her three other astronomy-loving friends convince people about space. Oliveria’s parents claim that when she was six years old, she enrolled in a CEAAL course and attended all of the courses. The youngster afterwards passed her exam with great gusto.