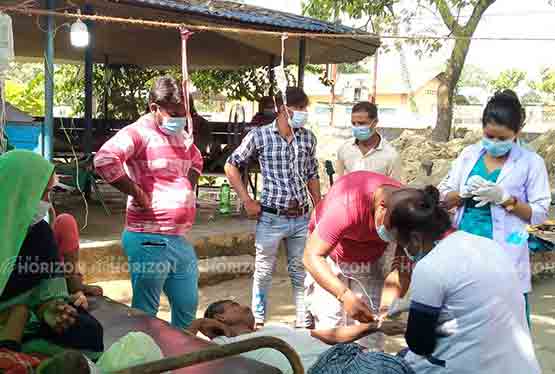 Outbreaks of diarrhea are declining in Krishnanagar, children are affected so far, The Horizon Times, News of Nepal

Residents of wards 7, 8, and 9 of Krishnanagar Municipality have been more affected as diarrhea has spread across the village. Health workers including Dr. Mukesh Chaudhary of Shivraj Hospital have been working day and night for the treatment of diarrhea patients.

Health workers say that the outbreak of diarrhea has increased due to lack of awareness, lack of attention to sanitation, and contaminated water. Dr. Chaudhary of the hospital said that they have provided necessary health services including examination and medical treatment to the patients and some of them have been referred to the District Hospital, Taulihawa, and Butwal.

Two-and-a-half-year-old Ayan Ali of Krishnanagar Municipality Ward No. 7 Sukhrampur was admitted to Shivraj Hospital due to diarrhea. Her parents had brought her to the hospital on Saturday after she had been suffering from diarrhea for three days. The parents said that the two-and-a-half-year-old boy had diarrhea six times a day. The hospital has provided medical treatment to the patients.

Her father Bharat Lal Kashyap has been admitted to the nearby Shivaraj Hospital for treatment after suffering from diarrhea 5-6 times a day. Her parents are worried as she is constantly vomiting along with diarrhea. But now vomiting has stopped after medical treatment.

Hemraj Pandey, chief of the Health Office, Kapilvastu, said that the number of diarrhea patients has come down after five days after the health workers were deployed day and night for medical treatment. As many as 688 diarrhea patients have been admitted to Shivraj Hospital till Sunday and 631 have been discharged after treatment, according to the hospital. Forty people were referred to Butwal and Taulihawa hospitals. A few days ago, two people died at a private clinic due to diarrhea.

Children are more affected by diarrhea

Five days after the outbreak of diarrhea, the number of patients in the hospital has gradually decreased. According to the hospital administration, 61 diarrhea patients were admitted on Saturday alone. Of the 17 patients admitted this time alone, 11 were children. They have been suffering from diarrhea, fever, and vomiting. However, the condition of the patient is returning to normal, the hospital said.

Diarrhea due to contaminated water

Contaminated water has been found to be the main cause of diarrhea in Krishnanagar Municipality since last Monday. Out of the four tested water, directional germs were found in the tube well and in the drinking water distributed by Nepal Drinking Water Corporation Bahadurganj. Excessive bacteria (directional germs) were found in the water sample test of the drinking water supply distributed by the institute. A technician of the test said that the water distributed by the institute looked dirty and cloudy with the naked eye.

The sample tested at Bhupu Sainik Drinking Water Banganga last Wednesday showed purity in water 100 feet below and 100 ml equivalent to 2 percent bacteria in a 40-foot tubewell. Technician Dhan Bahadur Somai said that very few bacteria were found in the supply stream. Similarly, a sample of a 100-foot tubewell did not show any bacteria in the water test.

Areas to be distributed by the Drinking Water Corporation, especially Krishnanagar Municipality ward no. 5, 7, 8 and 9 Residents of wards are more prone to diarrhea.

The corporation has issued a press release stating that the water distributed is pure. A statement issued on Friday signed by Nepal Water Supply Corporation Bahadurganj office chief Ramesh Magrati claimed that no contaminants and bacteria were found in the water supply area distributed by the corporation.

A person affected by diarrhea has undergone a covid test at Shivaraj Hospital on Sunday. Patients admitted to the hospital affected by diarrhea have undergone the covid test. Dr. Chaudhary of the hospital said that the covid was tested by antigen method after some patients showed normal symptoms of covid. As of Sunday, out of 33 samples collected from the antigen method, one woman tested positive.

An expert team of the Ministry of Health of the Government of Nepal has arrived in Bahadurganj, a diarrhea-affected area since last year, on Saturday. An expert team including epidemiology and World Health Organization under the Ministry of Health reached Shivraj Hospital, Bahadurganj on Saturday afternoon. Hemraj Pandey, chief of the Kapilvastu Health Office, said that an expert team including doctors had inspected the affected area, met patients, and collected samples. A team of three experts from the ministry has also collected water and direction samples.

Similarly, a team of Drinking Water and Sanitation Consumers Federation Kapilvastu has also visited the diarrhea-affected area and conducted the on-site inspection. FNCCI President Rajendra Bikram Shah led the visit to Shivraj Hospital in Krishnanagar Municipality and the affected areas. The team has held discussions with the residents of the municipality and health workers.

A team of the Federation of Drinking Water has said that such problems may arise as contaminated water can be pumped from the supply water chambers distributed by the corporation. Various organizations have reached out to households to collect information and raise awareness about water purity.