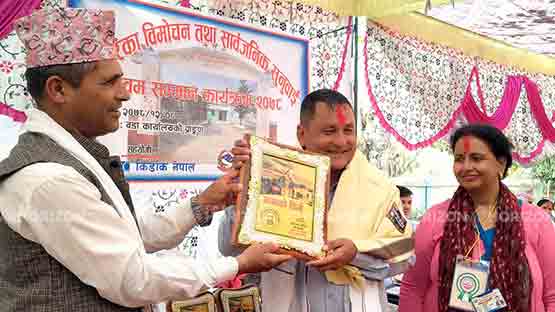 Souvenir launched in Buddhabhumi of Kapilvastu Nepal, The Horizon Times, News of Nepal

Nepal: Souvenir launch, public hearing, and honor program have been completed in Buddhabhumi Municipality Ward No. 9 of Kapilvastu. It is said that 70 locals were honored in the program held at the ward office premises on Tuesday.

Lumbini Province Assemblymember Arjun Kumar KC, while addressing the program, said that the work done by the ward was commendable. He said that it was important for others to learn from the historic work done by Ward No. 9 which no one else has done in this area.

Member KC expressed confidence that the Smarika would be effective in following the positive side of the times, adding that it would be easy to remember the past history. He suggested that the ward should improve the negative aspects by reviving the creative activities in the book.

Meanwhile, most of the speakers at the program said that their wards were relatively ahead of other wards. He also lauded the significant contribution made in the development work from the educational level. The locals have also asked the ward office about development issues and current issues. Ward Chairman Khumananda Neupane had clarified the answer.

Ward Chairman Neupane informed that 70 people including farmers, employees, well-done consumer committees, and students of different schools who participated in the competition were honored with certificates and medals.