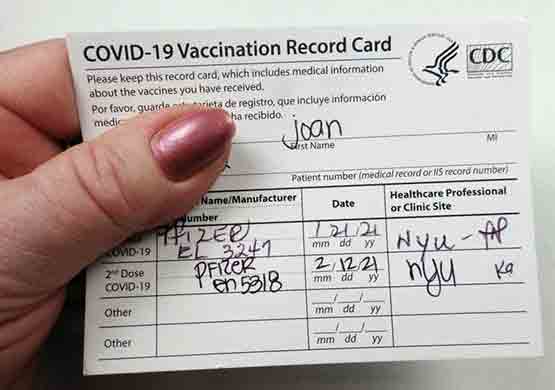 California: This week, a California woman licensed as a homeopathic doctor was charged and convicted for allegedly dispensing fake immunization cards.

Juli Mazi, a Napa resident, was charged with one count of wire fraud and one count of blatant lies connected to health care problems, according to the Department of Justice.

Mazi’s accused plan allegedly included the sale of fake drugs and forged immunization cards. As per the Department of Justice, this is the first time someone has been charged with distributing counterfeit immunization cards from the Centers for Disease Control and Prevention (CDC).

Mazi said the tablets, which she called “homeoprophylaxis immunisation pellets,” contained a trace quantity of the COVID virus, as per a criminal complaint obtained by Insider.

Customers were informed that by consuming these, they would be immune to COVID for the rest of their lives. Mazi would also distribute counterfeits of the CDC’s COVID immunization record cards in addition to the tablets.

According to the complaint, the fake cards falsely stated that Mazi’s customers had gotten the Moderna COVID vaccine. Mazi also directed her customers on how to fill up the fake vaccine cards with authentic Moderna vaccine lot numbers, according to the allegation.

Mazi would push her customers to buy her medications for their toddlers and babies, stating that vaccines approved by the US Food and Drug Administration (FDA) contain “hazardous chemicals,” according to the DOJ. This defendant is accused of defrauding and endangering the public by relying on people’s anxieties and spreading false information regarding FDA-approved vaccinations, as well as hawking phoney therapies that put people’s lives in jeopardy.

Even worse, the respondent reportedly made counterfeit COVID-19 immunization cards and urged her customers to falsely claim that they had gotten a vaccine, allowing them to evade efforts to control the disease’s spread, according to the DOJ’s announcement.

In the DOJ’s news release, agent Craig Fair of the Federal Bureau of Investigation’s San Francisco field office said, “Spreading misleading or deceptive health information about COVID-19 for personal gain, as the lawsuit alleges, is harmful and only fosters mistrust among the community.”

However, Insider’s Chris Stokel-Walker discovered in a May study that printing immunisation cards through internet print-on-demand businesses is easier than one might imagine.