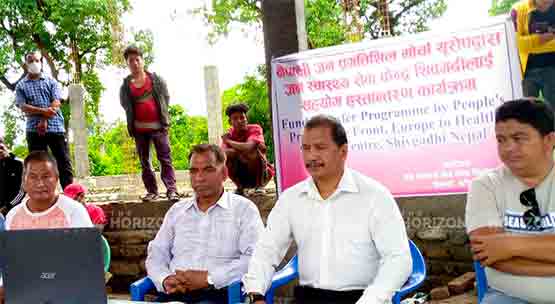 It is said that the amount was handed over to Netra Bikram Chand (Biplav) by Nepali Jana Pragatisheel Morcha Europe through a virtual meeting on Sunday.

Addressing the virtual program, General Secretary of the Communist Party of Nepal Netra Bikram Chand (Biplav) said that it was necessary to bring isolation operation for the easy treatment of the local people, adding that cooperation and collaboration with all were essential.

As the second form of Corona is very dangerous now, there is no definite time for the epidemic to come again, so the biggest hospital in the district is being built for the common people to save themselves and others from it.

Stating that various organizations and individuals have helped in the construction of the hospital, General Secretary Biplav said that the health security of the citizens is the first priority now. He said there was no alternative to building a hospital immediately to cope with the dilemma as corona treatment was becoming more difficult across the country and health care was becoming more fragile.

General Secretary Chand also expressed the party’s commitment to take initiative with the government to provide effective services by further expanding the hospital.

He said that the construction work of a well-equipped hospital in Corona has been expedited as there is a problem of not being able to get a bed in the hospital when one goes to the hospital due to a corona infection.