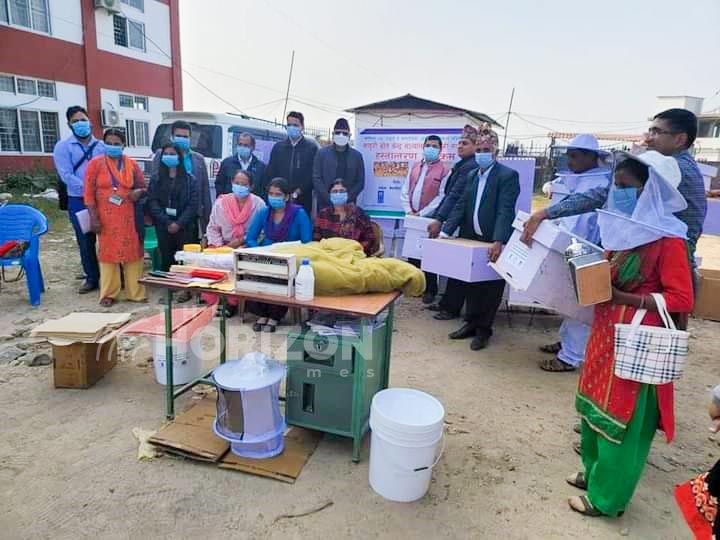 Sainamaina, Nepal: Modern bee hives have been distributed to farmers in Sainamina Municipality of Rupandehi, Nepal. The municipality has distributed 30 hives to the farmers on Thursday to promote bee keeping business and run bee resource center.

According to the municipality, bee hives have been distributed to beekeepers in the city through the Agriculture Development Branch of the municipality under the Covid-19 Rescue and Social and Economic Response Project in collaboration with the United Nations Development Program (UNDP) and Seto Gurans Child Development Service Rupendehi.

According to Chitra Bahadur Karki, Mayor of Sainamina Municipality, 15 beekeepers have been provided two bee hives to each. Karki said that other materials required for bee keeping along with hives have been made available to the farmers with the objective of making them self-reliant in agriculture by increasing honey production in the municipality.

Karki expressed the commitment of the municipality to provide land for bee keeping on lease basis based on the interest and success shown by the farmers in bee keeping. “There is a good market for honey now. The municipality is ready to help with incentives and technical training of Beekeeping commercially.

According to Sirjana Khanal, Chief of Agriculture Branch, 17 items including bee hives, honeycombs, plastic jackets, revolving hats, honey cutting nets, knives, bee brushes and hive stoppers have been handed over to the farmers.

Executive Director Sumitra Sharma said that the bee hive distributed by the municipality with the support of UNDP and Seto Gurans Child Development Service Rupendehi would add more encouragement to the farmers. Sharma said that technical training would be provided for commercial bee keeping in the coming year and the grant would be provided again on the basis of demand.

Lekhnath Neupane, chairman of the Bee Resource Center, said that the hive provided by the municipality has given more impetus to bee keeping business. Neupane of Ward No. 4, who is also a beekeeper, has been trading bees in 25 hives.

Similarly, Thakur Prasad Chalise of Ward No. 5, who has been beekeeping in 65 hives for the past four years, said that the municipality needs to pay attention to the lack of grazing area in the village.

Farmers of bee hives in the city have also demanded necessary technical training. Chief Administrative Officer of the municipality, Tekraj Panthi, said that the operation of the bee resource center aims to produce 20 to 30 tons of honey next year.