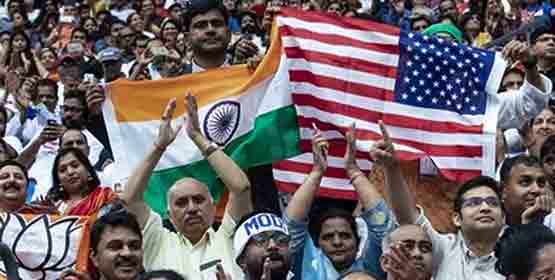 According to a US report, one out of every two Indian Americans encounters discrimination, the majority is based on skin color

New Delhi: According to the most recent Indian American Attitudes Survey (IAAS), one out of every two Indian Americans in the United States experienced discrimination in the previous year.

Investigators from Johns Hopkins University, the University of Pennsylvania, and the Carnegie Endowment for International Peace performed the poll, and the results were released on Wednesday. The most common form of prejudice was discovered to be based on color of skin.

The poll was taken between September 1 and September 20, 2020, during former US President Donald Trump’s final year in office and in the midst of the Covid-19 outbreak.

The study was done digitally using YouGov, a market research and data analytics organisation, and it got a response from 1,200 Indian Americans. The IAAS is an independent academic study that assesses the political views of Indian Americans and people of Indian ancestry in the United States.

Apart from the fact that one out of every two Indian Americans has experienced discrimination in the last year, the poll also found that the label “Indian American” is not generally accepted and is a disputed status. Only four out of ten people assumed that statement best described their situation.

In the United States, the ‘Indian American’ community is a sizable demographic. According to the US Census Bureau’s American Community Survey, there were approximately 4.2 million persons of Indian heritage living in the United States in 2018.

According to the results of a recent study, religion played an important role in the society. According to the survey, 40% of responders pray at least once a day, and 27% attend religious services at least every week.

In the wake of the outbreak, there has been a “troubling rise in hate crimes targeting Asian Americans,” however Indian Americans were not among top targets “as they were in the aftermath of the September 11, 2001 terrorist attacks,” according to the research.

Despite having such a large demographic, racism was discovered to be widespread and depending on a variety of reasons.

According to the statistics from the IAAS, discrimination based on skin colour was the most common kind of bias, with over 30% of respondents claiming they had been on the receiving side of it.

Many Indian Americans (18%) reported they had been discriminated against because of their race or religion, in addition to skin colour prejudice.

Muslims (39%) reported a higher level of religious prejudice, followed by Hindus (18%) and Christians (15%)

According to the survey, Indian Americans born in the United States are far more likely than their counterparts to claim prejudice.

While the study included responses from Indian Americans of various citizenship and residence statuses — green card holders, H1B visa holders, students, and so on – 77% of the respondents were US citizens.

As per report, political activity differed depending on nationality.

Citizens who were born in the United States had the maximum degree of political activity, followed by foreign-born US residents, and non-citizens.