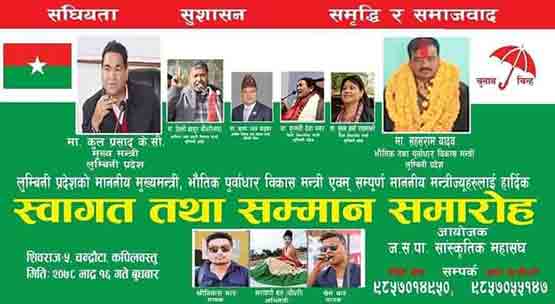 Chief Minister K.C and 6 other ministers are coming to Chandrauta, Kapilvastu, Will this visit will change the figure of the district?

Chandrauta: Lumbini Chief Minister Kul Prasad K.C and five other ministers are expected to visit Chandrauta. The minister is scheduled to attend a program organized by the JSP Cultural Federation at Shivaraj-5, Chandrauta on Wednesday. It is also said that the preparations for the program have been completed by holding a press conference on Tuesday.

The main objective is not only to welcome and honor the ministers but also to make them aware of the problems in the region, to coordinate between the government and the people, and to make them aware of the cultural aspects of the region, said JSP Lumbini Province President Ashok Kumar Yadav. As soon as the program is over, there will be a program to inspect the Krishnanagar checkpoint and the main checkpoint of Lumbini tomorrow, said Chairman Yadav.

In the reception and honors program for the newly appointed ministers in Lumbini, the ministers addressed the current situation and politics as well as a cultural program, said JSP youth leader Rahis Shah. He said that he was cooperating with other ruling parties in the program organized by the JSP Cultural Association. He also informed that there will be unique performances of national-level artists to make the program a grand success.