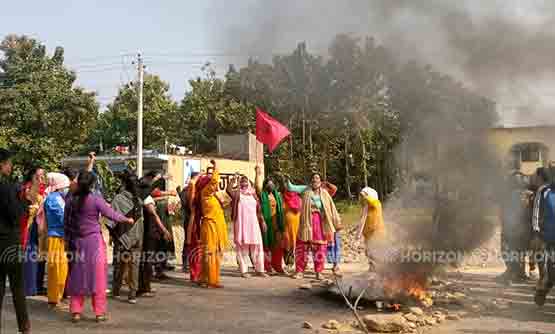 Coercive style repression on protesters in Chandrauta, The Horizon Times, News of Nepal

Kapilvastu: Police have arrested party leaders, cadres, women, and students in Shivaraj-5, Chandrauta of the district. According to the organizers, the protesters who went to shutdown Nepal on Tuesday were suppressed in a grandiose manner.

Police have arrested dozens of leaders and activists, including women, during the strike in the home district of the CPN (Maoist). Leaders and cadres of CPN-Chandrauta have been raising their voices against the sharp rise in prices of petroleum products and LP gas since last October 10. The CPN (Maoist) has warned that the police would be held accountable if the police intervened to stop the burning of tires at Chainpur in Chandrauta.

Transportation, market areas, industrial areas, educational institutions and hotel businesses in Kapilvastu district have been closed during the Nepal shutdown organized by the CPN (Maoist) against the price hike of petroleum products. The CPN (Maoist) has been chanting slogans against the sharp rise in prices of petroleum products and food items since this morning. Vehicles are not running on the roads. All long and short-distance vehicles are also closed.

The protesters are sitting on the highway and in the market, area to warn the people about the price hike. Workers, farmers, squatters, students, and others are taking to the streets in support of the Nepal shutdown and chanting slogans against the price hike. Emergency ambulances, fire engines, and milk trucks are operating during the shutdown. The shutdown is open after 5 pm.