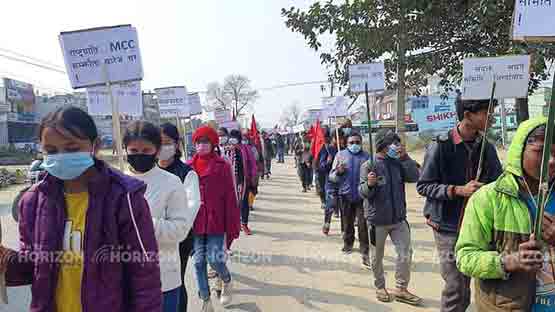 Five-party demonstration against MCC in Chandrauta in Nepal, The Horizon Times, News of Nepal

Nepal: A five-party protest against MCC has been staged in Kapilvastu’s Chandrauta. Protesting against the cancellation of the MCC agreement on Wednesday, Chandrauta Bazaar has turned into a rally at Chandrauta Chowk. It is said that the program was organized under the joint project of CPN (Revolution), CPN (ML), Rashtriya Jana Marcha, CPN (Masal), and CPN-Maoist.

CPN (Maoist) central member Bheshraj Bhusal said that the treacherous MCC agreement would not be valid under any circumstances. He also said that they are ready to make any sacrifice if they try to enforce it. Member Bhusal said that the long-term plan of the US is to encircle China as it is part of the Indefacific, IPS strategy.

Meanwhile, Ker Singh Adai, a representative of Rashtriya Janamorcha and central member of All Nepal Trade Union Federation (ANTUF) Antuf, clarified about the US hack in independent poor countries of the world. He said that the pressure to be taken in Nepal should be above the constitution of Nepal. Stating that the issue of bringing US troops to Nepal was against the interest of the Nepali nation, Adai said that there was no alternative to its abolition.

Most of the speakers in the program warned Prachanda, Oli, and Madhav Nepal not to confuse the people and pressured them to choose one constituency without any hesitation, and informed them that they would fight again on May 16. CPN-Revolutionary Central Member Pitamber Acharya, CPN-Masal District Spokesperson Chhabilal Gaire, CPN-MK District Coordinator Om Narayan Chaturvedi, and CPN-UML District Secretary Kamal KC addressed the program.