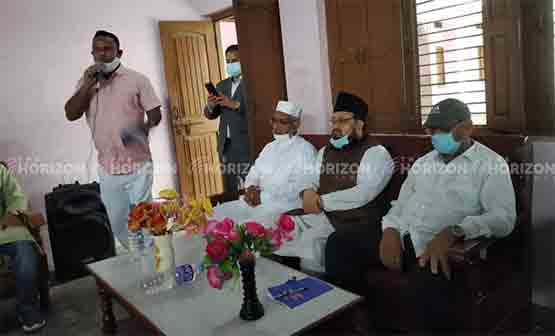 In the census, Muslim community of Nepal should include Urdu as the first language: Dr. Abdul Gani Al-Kufi

Kapilvastu, Nepal: A public awareness program related to the upcoming census has been completed in Krishnanagar Municipality of Kapilvastu, Nepal. According to the organizers, the program was organized by the Muslim Commission at Ayesha Girls College in Jhandanagar, Ward No. 3 of the municipality on Saturday.

Addressing the program, member of the Muslim Commission Mirza Arshad Beg said that they are always ready to work for the welfare of the Muslim community and have been moving forward as per the suggestions given by the community.

He also urged the Maulana Dharmaguru, students, social workers and youth of the madrasa to make the census a success from their respective levels. Member Beg urged that if any family member is abroad or elsewhere, those members should be included in the exclusion count.

Similarly, Seraj Ahmed Farooqi, Central Chairman of the Muslim Etihad Organization of Nepal, while speaking on the occasion, stressed on the need for the Muslim community to conduct the census.

Stating that the leaders of the Muslim community have an important role to play in carrying out the census and commission, he expressed his commitment that all Muslims in the mountains, hills and the Terai should be equal and always ready for the upliftment of the community.

He also said that the government has made it easier for Muslims to raise their voice by forming a Muslim commission.

Meanwhile, the national president of the National Madrasa Association of Nepal Dr. Abdul Gani Al-Kufi said that the Muslim community should include Urdu as the first language in the census and urged that the names of the children reflect Muslim civilization and culture.

He appreciated the work of the Muslim Commission in conducting public awareness program on the census even at such a time and urged all members of the Muslim community to participate in the census.

Al-Kufi said that the National Madrasa Association of Nepal should always fight for its rights and interests before the government through the commission.

Stating that the actual number of the Muslim community should be included in the census, Pathan suggested the Muslim Commission to spread public awareness about the census in the community through the teachers and religious leaders of the madrasas.

Most of the speakers at the event demanded that the actual population be ascertained by including the Muslim citizens who were not included in the census. He also stressed the need for all to work hand in hand with the Muslim Commission.