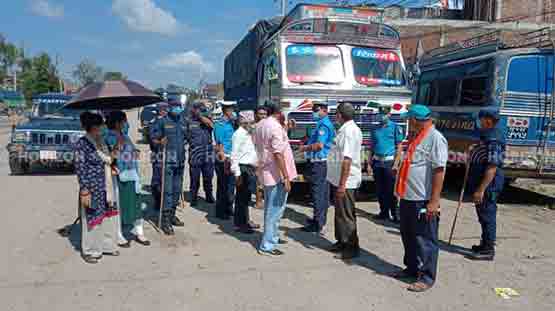 The Chandrauta market of Nepal has been monitored on Thursday after the news was published a few days ago that the locals had not implemented the information. It is said that the market was monitored under the leadership of Shiva Kumari Tharu, Deputy Chief of Shivaraj Municipality.

The Shivraj Municipality had issued a notice on July 8 to remove the structures on the road within a week. Even after the third week, it could not be implemented.

It is said that the Shivraj Municipality has presented aggressively saying that the local businessmen have defied the written notice. Municipality Deputy Chief Shiva Kumari Tharu informed that the market was monitored for the first time to make the market green after ignoring the information.

Ward Chairman Arjun Bahadur Pandey said that they had published a notice to remove the encroached structure as the number of accidents was increasing day by day due to road encroachment.

As the municipality has repeatedly refused to remove the encroached structure, the city has been refusing to do so. A team including Chandrauta Police Office had monitored the situation.