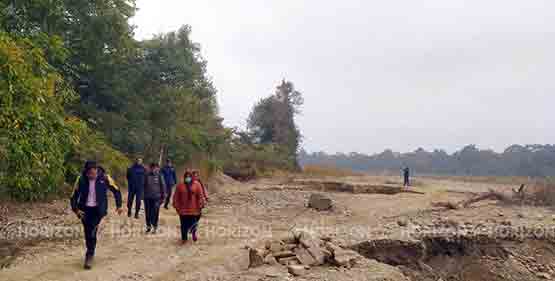 Millions of riverine products smuggled out of non-contracted fields, The Horizon Times, News of Nepal

Nepal: It has been found that crores of riverine products have been excavated from Surahi river in Kapilvastu’s Shivaraj Municipality. Ward No. 1 and 9. Locals have complained that riverine materials like stones, ballast, sand and musk were smuggled out of the border.

Locals have also monitored the Surahi River on Monday saying that they have ignored the requests made at the ward office and ward police office Chandrauta after receiving information that smuggling was taking place. He said that riverine substances were being loaded on dozens of tractors during the monitoring. Locals have complained that the concerned authorities have not taken any action despite the illegal smuggling of riverine products from dozens of tractors during the day.

Prakash Thapa, a local, said that the contractor had deducted royalties from the Jokohi River near the Surahi River. He said, “These thieving contractors, brokers, and corrupt people have not been able to protect the valuable assets of the state. Why is the concerned body silent to bring such people under the purview of law?”. “Everyone seems to be in agreement,” he said. Dil Maya Batha Magar, a local, said that the monitoring was carried out after the chain of excavation of illegal riverine substances in Surahi River was not stopped. Magar also expressed her grief saying that only the locals would complain and draw attention to stop the exploitation of the river.

Similarly, Ward no. 9 Chairman Chur Bahadur Khadka demanded that the smugglers who stole riverine products from other areas should be brought to justice and action should be taken against them.

Inspector at the Ward Police Office, Chandrauta, Shankar Acharya said that action has been taken against the culprits. He said that it was necessary to cooperate with the local citizens and social workers to control such activities in the coming days as the smuggling operation was causing problems to all. Police Inspector Acharya said, “If everyone is shaking hands, it will be easier for us to control it.”

Shivraj Nagar Chief Netra Raj Adhikari said that action would be taken according to the law if the contractor was found to be involved in illegal smuggling against the agreement. He said that the necessary process will be taken forward if the contractor has done his will. “No one is allowed to steal illegally,” he said. The city chief said that the monitoring work would be continued immediately.

Khadka Wood Furniture Suppliers, which started work on Mangshir 17 under an agreement with the municipality, have excavated riverine materials. Earlier, the contractor used substandard masonry tools in the river and later removed the tools. It has been mentioned in the notice board that only 4,500 cubic meters can be extracted from the river with an agreement of Rs 3.2 million.

The locals have suspected that they are in cahoots as the contractor company has not shown any interest in the complaints received from the locals of the municipality who have to monitor and inspect the excavation. District Coordinating Committee Kapilvastu has also complained of weakness in the contract of riverine products in the western and remote areas of the district.