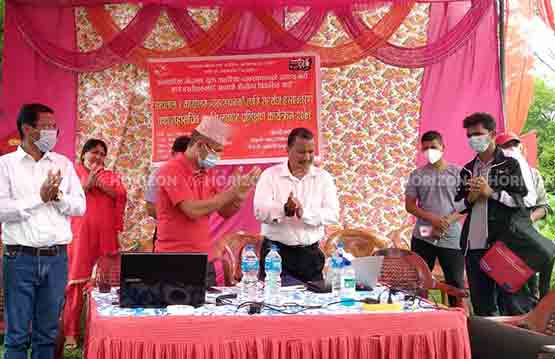 Kapilvastu: Assistance for hospital and office management has been handed over and the training program has been completed by General Secretary Biplav. The money transfer and training program was held through a virtual meeting held in Shivgadhi Municipality-9, Shivgadhi on Friday.

Addressing the virtual program, CPN General Secretary Netra Bikram Chand (Biplav) said that it was commendable that the local people were comfortable and the CPN liaison office was operational. “The third form of the corona is very dangerous now and the epidemic could come again at any time,” he said.

Stating that various organizations and individuals have helped in the construction of the CPN office and hospital, General Secretary Chand said that the health security of the people is the first priority now. Chand also said that it was very important to build a hospital immediately to cope with the epidemic as corona treatment was becoming more difficult across the country and health care was becoming more fragile.

General Secretary Chand also expressed the party’s commitment to take initiative with the government to provide effective services to further expand the hospital. He informed that the construction work of a well-equipped hospital in Corona is in full swing and services will be provided easily from the hospital as there is a problem of not being able to get a bed in the hospital due to corona infection.

He also thanked the Nepali Jana Pragatisheel Morcha, Qatar and Bahrain for providing financial assistance from abroad to complete the Central Liaison Office and hospital facilities under construction for the service of the common people. He also lauded the party organization for playing an important role in the construction of the hospital, saying that communication was easy and health was a great asset.

The program was addressed by Shivgadhi Village Committee in-charge Binod Luitel (Pabel), district president of the youth organization and others as well.