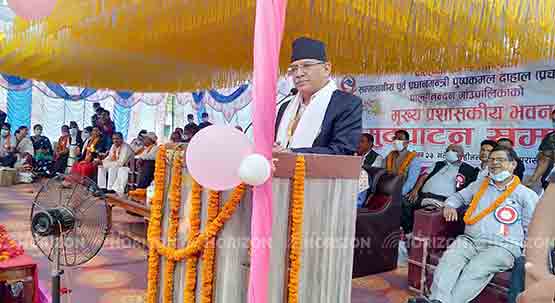 Nepal: The inauguration ceremony of the administrative building of Palhinandan rural municipality of West Nawalparasi has been completed.

The administrative building of Palhinandan village was inaugurated under the chairmanship of Palhinandan rural municipality chairman Baiju Prasad Gupta (Deepak) and the chief guest of the chairman of the Communist Party of Nepal-Maoist Center and former prime minister Pushpa Kamal Dahal (Prachanda).

Saying that KP Oli had been kicked from Baluwatar to Balkot, the hero of the republic and honorable former Prime Minister, Pushpa Kamal Dahal (Prachanda) had warned that Oli’s whereabouts would be cleared from Nepal’s politics.

Addressing the inauguration program, former Prime Minister and Chairman of the Maoist Center Prachanda said that the problems of citizenship of the Terai Madhesi people, the problems of squatters, and the problems faced by the farmers every year due to floods would be solved as soon as possible.