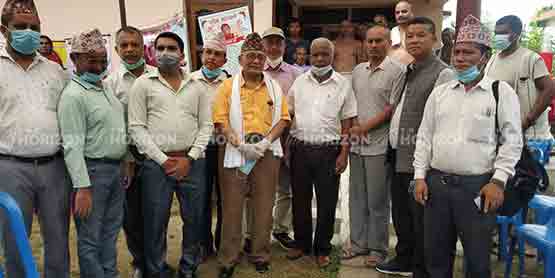 Rights given by the constitution should not be abused: State Chief Sherchan

Kapilvastu: Lumbini Chief Amik Sherchan said that the local government was in the process of meeting the needs of the people as there was a three-tier government. This was stated by Chief Sherchan at a program organized at Kapilvastu’s Shivaraj Municipality-1, Shivpur on Wednesday.

Speaking at a condolence meeting on the demise of Uma Kumari Khatri, mother of Narendraman K.C, a former member of the National Convention Organizing Committee of Maoist in Shivpur, Sherchan said the change of country was possible due to many Nepali mothers.

He said that the current situation has been achieved by shedding the blood of thousands of youths and it is more commendable than the past in terms of constitutional law.

He thanked his 9 brothers and sons for being active in social reform in one way or another. Dinesh Pun, chairman of the Shivraj Nagar Committee of the CPN-Maoist Center, read out the biography of the late mother.

The sons of the late mother are former chairman of Rastriya Janamorcha Kapilvastu, former state committee secretariat member of Maoists, former district committee member of CPN (Maoist) and social worker Jagatman K.C, advisor of Rastriya Janamorcha Kapilvastu Chhand Bahadur K.C, former member of National General Convention Organizing Committee Narendra Man K.C. are active in the social sphere. Khatri, who was born in 1988 in Okharkot, Pyuthan, died at the age of 90 in her own residence in Shivraj Municipality-1.