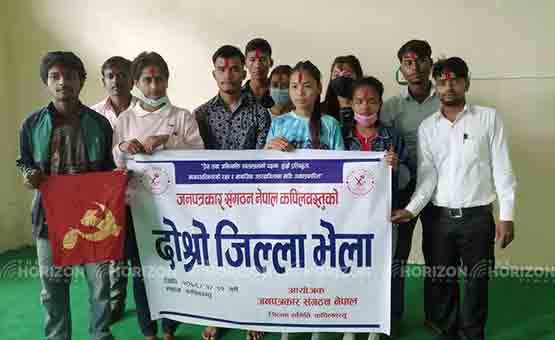 Kapilvastu: The second district meeting of the People’s Journalists Association Nepal Kapilvastu has been concluded. A 15-member working committee has been formed under the chairmanship of Anil Tharu at a meeting held in Gorusinghe on Saturday. Iman Sunar and Susmita Bhattarai have been selected as the secretary and treasurer respectively. The newly formed committee has stated that 4 posts are vacant to nominate additional members later.

Meanwhile, Central Member of the Communist Party of Nepal and Kapilvastu-Arghakhanchi District In-Charge Padam K.C (Jujharu) addressed the program and said that the field of journalism is a mirror to change the society. K.C clarified that it is important for the younger generation to join hands in the world of communication and contribute to the transformation of society by communicating factual information not only to themselves but also to the common people.

He said that the journalist has an important role in the transformation of society by portraying the real events of the society. Jujharu said that the journey of pro-people journalism was different and challenging from professional journalism. He urged the fighters to do mission journalism by building public opinion for building a scientific socialist state. On this occasion, central members of the organization Dana K.C and Anil Nepali stressed the need for all to do investigative and public journalism as journalism is a means of social transformation.