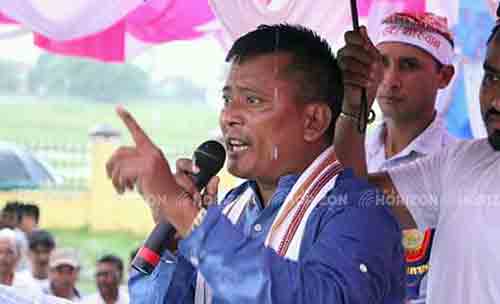 Struggle will continue if the government’s discrimination does not end: Coordinator Tharu, The Horizon Times, News of Nepal

Nepal: Laxman Tharu, the coordinator of the Nepal Democratic Party and Tharuhat Tharuwan National Campaign, said that the demands of the neglected tribals would be toughened if the issue was not addressed. Tharu warned that the struggle would continue until the government’s discrimination on the basis of caste, class, gender, and region was ended and rights were not achieved.

This was stated by Campaign Coordinator Tharu at a meeting and introductory program with the youths at Kapilvastu’s Chandrauta on Sunday. He stressed the need to raise the issue of amending the constitution in a way that would bring justice to the Tikapur issues raised during the drafting of the constitution, including Adivasi, Janajati, Dalit, Muslim, Madhesi, and backward Khas Aryas. The coordinator of the campaign, Tharu, also demanded unconditional release of the social activists involved in the case along with Reshmalal Chaudhary, who is living in jail on false charges.

He said that he would accept the guiding principle of egalitarian socialism of the country while maintaining the integrity and sovereignty, independence, nationality, national unity, independence and self-respect of all castes. Tharu urged the government to implement the policy of guaranteeing a corruption-free nation and the best interests of all the people as well as the international treaties and agreements reached in the past in a way that is conducive to the people.

The Co-coordinator of the campaign, Shravan Tharu, said that the people’s rights parties are now behaving differently from the aspirations of the people. Similarly, the Central Chairman of NELAP, Bhanuram Tharu, said that the party was continuously moving ahead with the national campaign. He said that he would take the party to the forefront by involving the younger generation from rural areas.

Meanwhile, Bhumi Baral, Central Vice-Chairperson of NELAPA, said that the cultural reawakening collective leadership system with the determination to believe in egalitarian multi-ethnic democratic federal pluralism based on the principle of participatory system would be embracing the need for proportional, inclusive and legislative-executive prime minister. He also expressed his commitment to be dynamic with common views among the people on this issue.