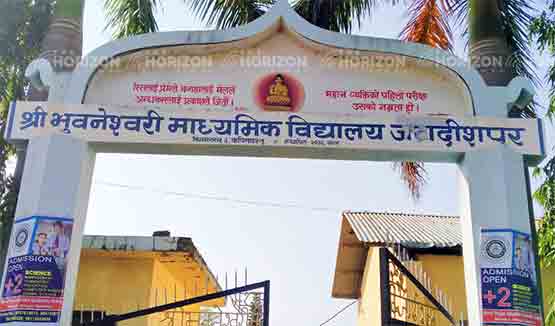 Kapilvastu: It is said that a school is a temple. Where knowledge can be acquired in a clean and fair manner. The life of thousands of conscious social beings is being guided by good leadership from the school. There is a close relationship between the student and the school, just like there is a stone between a stone and clay. But if the same relationship breaks down, the very existence is likely to be jeopardized. Like the above relationship, the future of hundreds of students cannot be said to be dark.

A similar incident has been raging in a school in Kapilvastu for a few months now. While the real issues are being discussed, nepotism is still being discussed. Bhubaneswari Secondary School, located in Vijayanagar Rural Municipality-3, Jagdishpur of the district, has been operating since 2036 BS.

The administration has stated that the school has been recruiting half of the teachers every year. Even though the civil engineering class has been operating since 2075 BS, the teaching posts could not be filled. The first advertisement was issued as per the decision of the management committee on Bhadra 10. The school administration has admitted that they could not conduct the examination and interview due to internal problems.

Chaudhary said that he had paid Rs. 6 Lakhs. The controversy has started after Principal Hassan said to pay more 4 lakhs to the school management committee to help the school with some amount of money. Chaudhary couldn’t pay more hence the controversy was appeared.

In this regard, Daya Shankar Yadav, chairperson of the school management committee, said that discussions were underway to help 4 lakh schools. During the discussion, it was decided to make the examination fair in the end, said Chairman Yadav. He further added that he was not aware of any other issues.

The money transaction could not be confirmed as the victim could not provide sufficient evidence. It is understood that the relationship has broken down due to disagreement between them recently. Although Chaudhary repeatedly tried to reach the house and give him money, he refused, said Hassan. In a conversation with reporters on Wednesday, he said that he would resign from the teaching profession if it was proved that he had taken money as he was trying to deceive him by making false allegations.

Meanwhile, the Vijayanagar Rural Municipality Education Branch has stated that there is no official information. Branch Chief Harihar Belwase informed that action will be taken against the culprit after conducting an investigation into the matter.