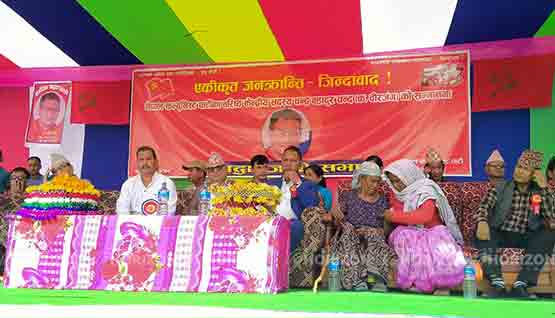 The country may have an accident: Biplav, The Horizon Times, News of Nepal

Kapilvastu: General Secretary of the Communist Party of Nepal Netra Bikram Chand (Biplav) has said that there is a possibility of an accident in the country. This was stated by General Secretary Chand at a tribute meeting organized by CPN-Kapilvastu at Kapilvastu’s Shivgadhi on Wednesday.

Chandra Bahadur Chand (Birjung), brother of General Secretary Chand (Biplav), had passed away on October 12 while undergoing medical treatment. Addressing the Shake meeting held in honor and remembrance of Birjung, General Secretary Chand recalled that the revolution had suffered incomparable damage and said that now is the time to think about the country as whatever one does, whatever one says.

At a meeting of senior CPN (Maoist) central member Chandra Bahadur Chand (Birjung), Biplov said that the party had suffered a great loss due to the loss of a skilled guardian.

Praising Chand’s contribution to the communist movement in the past, he recalled that he had spent some time in jail for the country and the people. Praising the contribution and positive work of the Nepali Congress in the country, Biplav said that the political parties have been leading the country towards instability lately. He noted that the failure to form a sustainable government has resulted in a large number of cabinets and the formation and resignation of the party.

Meanwhile, Krishna Bahadur Mahara, Central Spokesperson of the Maoist Party, while addressing the tribute rally, said that the late Bir Jung had not ended the battle with imperialism. Saying that the revolution is not over yet, he argued that all communists should be united. Mahara, who is also the former speaker, said that the international powers were trying to take Nepal in the wrong direction through the MCC.

Stating that Nepal will be made dependent on Nepal because of MCC, Mahara said that revolution and rebellion are needed by uniting the people. He said that the feudal lords were trying to raise their heads again and he was ready to take any step like himself to end it. Expressing homage to Birjung, Mahara said that the pain of losing a promising person was incomparable.

He said that the party would carry forward the line of action of the integrated people’s revolution with the determination of the leaders of the revolutionary party and the warriors of the communist movement, the guardians of the revolution, and the efficient organizers. Mahara claimed that the state authorities and rulers who committed inhumane treatment were to blame for the death of leader Bir Jung.

Chandra Bahadur Chand (Birjung), who was born in Rolpa’s Iriwang on February 18, 1961, passed away on October 14 while undergoing medical treatment. The untimely demise of Birjung, who had been making significant contributions to the various stages of the Nepali revolution during his lifetime, has shocked the Chand family and the entire party ranks. All the party cadres and people participating in the program paid homage to Bir Jung. According to the organizers, everyone took turns to pay homage to Red powder and the flowers on his photo.