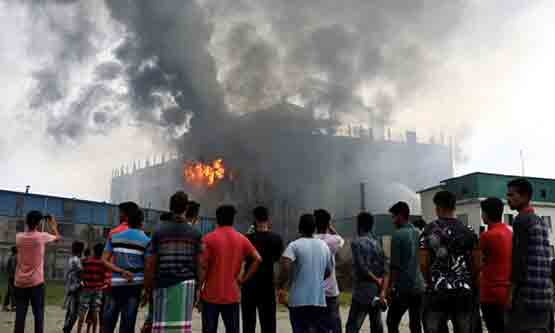 The owner of a Bangladeshi factory booked with murder

Bangladesh: The proprietor of the Bangladesh plant, the fire at which killed 52 individuals was captured and accused of homicide on Sunday. Seven others have been captured. It has now arisen that kids as youthful as 11 had been working there.

The fire at the production line broke out on Thursday and seethed for over a day. A different investigation into the utilization of youngster work has been dispatched.

The business’s entrance had been kept locked at the time of the blaze, according to Jayedul Alam, police chief for Narayanganj district, where the company is situated, and the company had broken many safety laws.

“It was a planned assassination,” the police chief told AFP. All eight people arrested have been charged with murder.

Hashem told the Daily Star newspaper before his detention that the fire “may have been a result of workers’ negligence,” implying that a thrown cigarette may have ignited the massacre.

The dead of 48 were discovered on the third floor of the Hashem Food and Beverage factory outside of Dhaka by emergency authorities.

The escape entrance to the main staircase had been kept locked, according to the fire brigade, and extremely combustible chemicals and plastics had been kept in the building.

The usage of child laborers at the facility has been investigated, according to Monnujan Sufian, the state minister for labour.