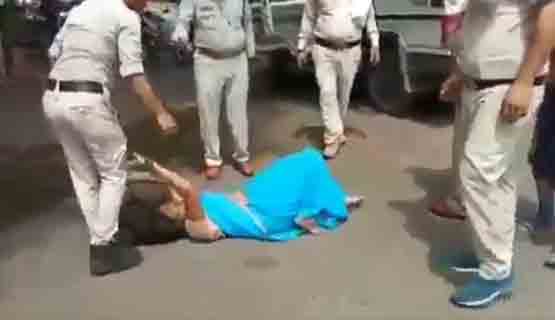 India: After a clip from the latter hitting and pulling a woman for not wearing a mask in Sagar district of India goes viral, an assistant sub-inspector and a woman constable were dismissed with immediate impact on Thursday.

Atul Singh, the Superintendent of Police in Sagar, said Constable Archana Dimha used excessive force while arresting the woman for hindering administrative work and offending with police. According to the officer, ASI LN Tiwari was also found to have failed to perform his duties appropriately.

The lady in question, Chanchal Ahirwar, and others were also charged with disrupting and assaulting government employees under sections 353, 332, 188, 294, 506, and 51 B of the Indian Penal Code and the Disaster Management Act, according to Singh.

Some officers, along with the constable, can be seen in the clip hitting up the woman, throwing her down, and pulling her by her neck. During the coronavirus-induced shutdown in Sagar’s Rahli district, the woman was reportedly beaten up and drove by police for not wearing a mask while going out to buy groceries.

When she and her daughter were arrested about 11 a.m. on Monday for not wearing masks, the woman reportedly struck the constable first, according to a police officer. According to Rahli Sub-divisional Officer of Police Kamal Singh, “the video just revealed partially of the case.” “The woman struck a female cop first, causing marks on her face created by nails,” he said.

The cops attempted to take them to an jail in a jeep as punishment, but they refused and reportedly assaulted the constable.

MP Women’s Commission Chairperson Shobha Oza, who shared a video of the event on Twitter, described it as “cruel and horrific.”