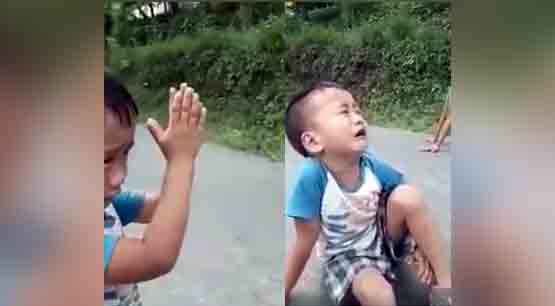 In Sikkim, a Nepali kid pleads with his folding hands not to make curry to his raised hens. See viral video which is in Nepali language

Sikkim: After the chicks he bred were sent for poultry farming, a young kid from Sikkim broke into tears. The kid is from Nepali blood as both of them father and son are talking in Nepali language.

The distraught Nepali kid can be seen imploring his relatives not to take them away in a video that has gone viral. The child, who claimed to be from Melli in South Sikkim, was unaware that the chicks were intended for poultry and could not be kept for him.

The little child is seen screaming and asking the elders not to pack the chicks into the vehicle in the over five-minute video. He may be seen weeping and pointing at the birds.

He suddenly falls to the ground and tears after folding his hands and requesting his elderly people to leave the chickens alone.

Finally, when the vehicle is ready to go, he bids farewell to the chickens. As compensation, his father promises that he would provide him additional chickens.

Several comments are from Nepali language praising the heart of small kid.