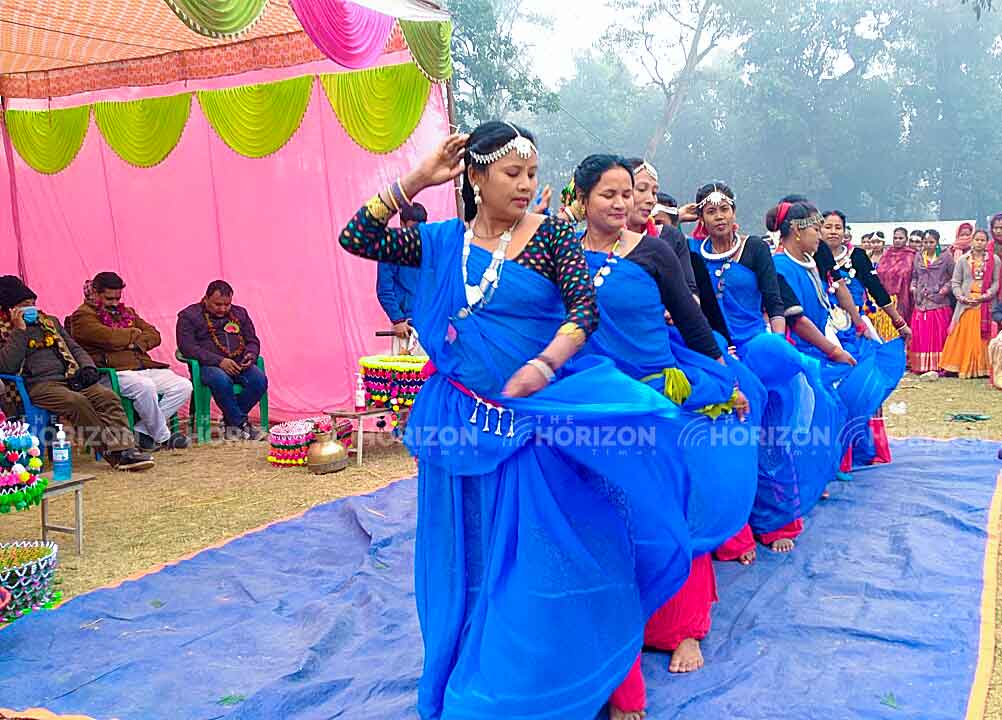 Glimpse of Magh and Maghi festivals of the Tharu community, Tharu News

It is the biggest festival of the Tharu community after Dashain. According to the local Tharu leaders, Maghi is considered as the New Year by the Tharu community as new work begins with the Maghi festival, birds change their language and new shoots sprout from the trees.

Maghe Sankranti Therefore, in the month of Magh, houses are distributed in the Tharu community, land acquisition or not, year-round review and planning for the coming days are also made in Maghi. Similarly, in the Tharu settlement, it is customary to enjoy Tharu dances, songs and songs that reflect the common Tharu identity.

In the Tharu community, the tradition of dancing and singing has been going on for a month.

According to the Tharu leader, Maghi has been celebrated as a special and main festival for generations. At present, the world is struggling with Covid-19. However, the Tharu community is engaged in celebrating the Maghi festival by organizing cultural programs for the protection and promotion of their original cultural identity in the Tharu-dominated area, said Tharu social activists.

Even though the Tharu community is the second-largest population in the country, there are still some differences in language and attire. Therefore, according to different places, each festival is celebrated in different ways. Meanwhile, when it comes to Kapilvastu, the proverb “Pus Khaw Magh Lagav” is popular.

It has to be interpreted as the Tharu community of Kapilvastu. They bow down to those who are greater than themselves and receive blessings.

It is customary for a married couple to give a gift to unmarried gils in addition with the rice and other ingredients. Similarly, the Tharu leader of Kapilvastu says that the unmarried woman donated the surviving material to the Brahmin (Pandit).

Shivaraj Nagar Deputy Chief Shiva Kumari Tharu has said that it is customary to kill pigs on the last day of Paush. She said that on the same day, people from all over the village would gather and distribute pork and chicken meat to their homes.

After killing pig, they take their home and eat many dishes such as yams, snails, dhikri, fish and wine with the family.

Similarly, Kapilvastu District President of the Tharu Welfare Assembly Uma Shankar Tharu said that the night has been getting shorter and the day has been getting longer since the Maghe Sankranti. He said that the Tharu community has a tradition of eating groundnut, sweet-potato and yam grown under the ground to keep the body cool as the summer season starts from January.

He said that the people of the Tharu community, who had gone out for education and employment, used to return to their homes to celebrate the New Year.

Chairman Tharu said that the culture of bowing in the village house in Maghi, visiting sisters with gifts, organizing Maghauta dance, sharing, choosing village leader and Badghar has been going on since time immemorial.

Chairman Tharu also said, on the morning of Maghe Sankranti, it is customary for everyone to go for a bath in the nearby stream. After bathing, they come to the house, touch the lentils, rice, salt and bow down to the elders and get blessings.

On the same day, there is a tradition of going to enjoy the upcoming fair and playing games in the village.

Protest by showing black flag to the Chief Minister