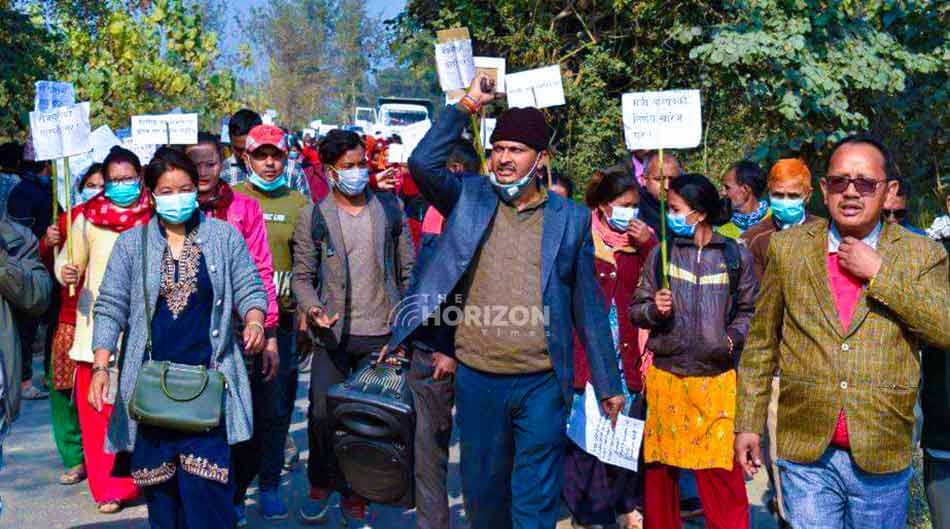 Kapilvastu, Nepal: The Division Forest Office, Gautam Buddha’s office in Kapilvastu has been cordoned off saying that the government has not lifted the ban on, timber production, sale and transportation.

Consumers of community and partnership forests have also protested against the government’s decision. A rally was held at Samiti Chowk of Shivaraj Municipality by surrounding the forest office.

Chairman of the Kapilvastu Partnership Forest Management Committee, Gangesh Tiwari, said that the government has ignored the repeated demands to lift the ban on timber products including forest management.

He said that the decision of the Council of Ministers was taken on the basis of irrelevance with full stupidity.

“This decision of the government is against the Ban Act. It is part of a plan to decompose Nepali timber in the forest and import billions of timber from abroad,”.

Renu Sen, coordinator of the Struggle committee, said that the Struggle Committee will now demonstrate the revolution with vehicle strike.

The government on 28th of  May had decided to immediately stop all the work saying that the forest area has been misused for transporting timber in different parts of the country.

The decision is being protested across the country. Partnership forests, community forests, federations of forest products entrepreneurs and forest related organizations have been pressuring the government to rectify the decision.

Ram Bahadur K.C, Province member of the Community Forest Federation, said that the problem has been aggravated by the government’s ban on the trade of forest products, which has contributed to the growing economic crisis and unemployment during the Coronavirus epidemic.

Committee formed for proper protection and promotion of Tharu Museum