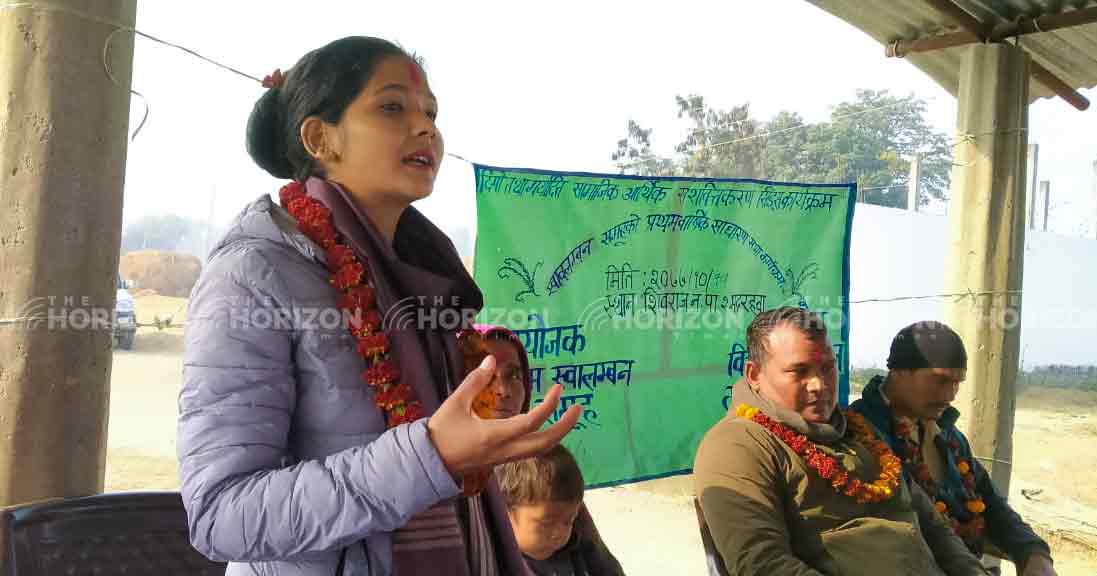 Kapilvastu, Nepal: The first general meeting of the Saksham Swavalamban Group at Kapilvastu’s Shivaraj-2, Madarahawa has been concluded.

Chairperson Sita Tharu informed that the general meeting of the group was held with the support of KIRDARC Nepal and Storm Foundation’s Sustainable and Dignified Socio-Economic Empowerment.

The meeting held on Sunday has selected a new leadership in the group with Sita Tharu as its chairperson. According to the newly formed group, Ram Kali Tharu has been elected as the Vice President and Shyam Kali Tharu as the Secretary.

Addressing the general assembly, Shivakamari Tharu Deputy Chief of Shivraj Municipal said that women of the Tharu community have been relatively active even within the indigenous community.

She is happy to see a woman who could not even introduce herself in the past now is able to speak in public.

Stating that the women of the Tharu community should now move forward in other fields including education, Tharu said that it is necessary to develop the habit of saving by becoming self-reliant as employment.

Stating that one should not live in the hope that others will give, she said that it is important to take authority by waking up or fighting on one’s own. Stating that it is still important for the group to move forward, she also expressed her commitment to help as much as possible.

Tharu also praised KIRDARC Nepal for its role in positive change in the society. She also said, “The importance of Tharu identity, including the dhakiya and snails used by them, is evaluated by other communities.”

Similarly, Kapilvastu District Coordinator of KIRDARC Nepal and Storm Foundation Krishna Rawal said that 1, 2, 3, 5 and 11 wards of Shivaraj Municipality are being running now.

He said that the sustainable and dignified socio-economic empowerment program is the goal of their organization and would play a significant role in positive change in the society.

Stating that the area in which they have invested has been effective. Rawal also expressed his commitment to bring even better programs in the coming days.

The program was attended by Ram Bahadur Tharu, Ward Chairman of Shivraj Municipality Ward No. 2, Indu Tharu, Community Facilitator of KIRDARC Nepal and Storm Foundation, local social workers and others.