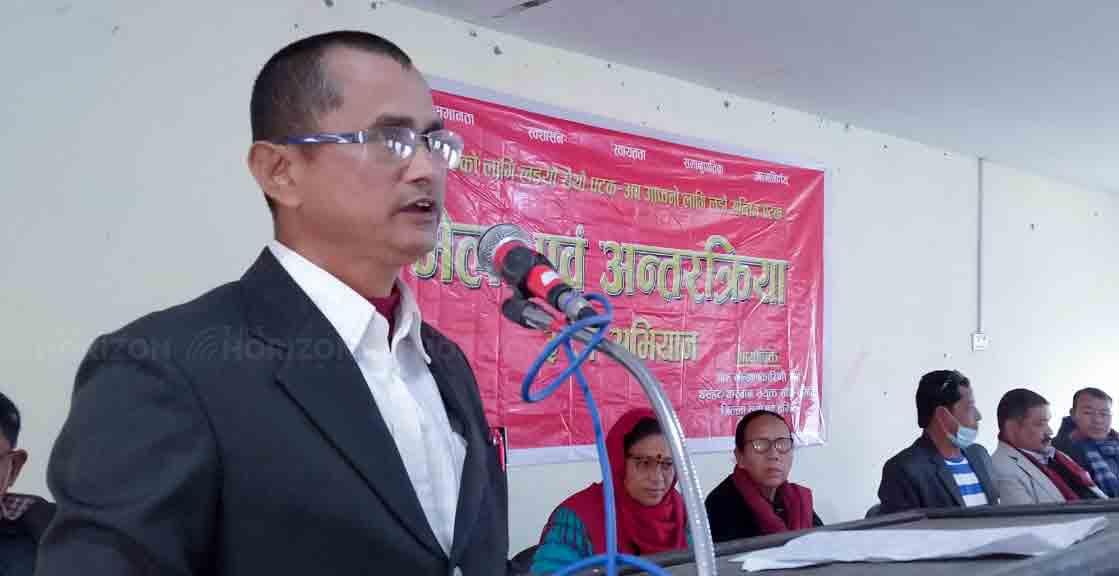 Gathering and interaction for Tharu’s rights, interests and entitlements

Kapilvastu, Nepal: A gathering and interaction 3 “Ja” campaign program has been held at Tharu Welfare Assembly in Gorusinge, Buddhabhumi Municipality-2 of Kapilvastu. “We fought for others hundreds of times; now let’s fight for ourselves for the last time was the slogan.

Member Chaudhary also said that the Tharu Commission and other people were abused in the election in their name. Demanding the release of Tharu leaders including Resham Chaudhary and Laxman Tharu from the Tharu community, Chaudhary urged the general public to save their existence.

Explaining that “Ja” written on the banner of the interaction program means public awareness and mass mobilization, Chaudhary also said that there is no alternative to make the community aware for the benefit of the Tharu community.

Speaking on the occasion, Tharu Welfare Association central member Rukmini Tharu said that the Tharu community is not Hindus but Buddhists and it is important to adopt a strategy. Stating that the responsibility of ensuring the rights, interests and entitlements of the Tharu community lies with the younger generation, she stressed on the need to take the lead in every field including education and politics.

Stating that the Tharu youth generation should not remain silent to get the rights, there is no alternative for the Tharus across the country to move forward as one. She shared her experience of the “Jagran Abhiyan” from Mechi in the east to Mahakali in the west. Tharu expressed her experience that “During the campaign, a person asked me a question: ‘We have become the garbage thrown on the road.’

And I replied that yes, we have become garbage, but we are engaged in the campaign to make organic manure by collecting the same garbage in one place and one day we will take the same manure to the field. ”

Member Biswas said that the state has been imprisoning Tharu community leaders one by one since the Tharuhat movement in Tikapur.

Similarly, former M.P Bishram Prasad Tharu said that Tharus need to be aware. He said that every Tharu leader and organization associated with Tharu would play an important role in saving the existence if they unite.

Tharu Welfare Assembly central members Janjir Prasad Tharu and Sumitra Tharu said it is important for Tharu people across the country to move forward unitedly for the rights, interests and entitlements of the Tharu community.

He said that the movement would be strengthened only if the Tharu leaders, who were living in jail during the Tharu movement, were relieved.